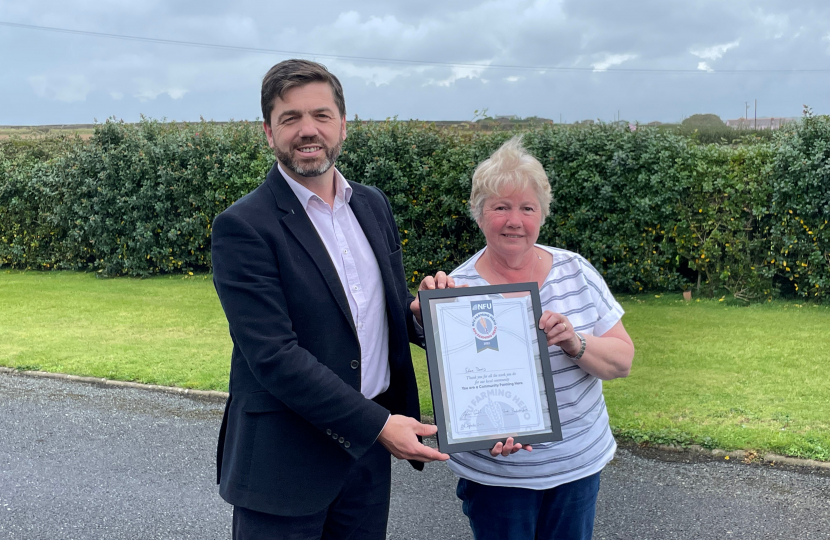 The NFU launched this new Community Hero Award to “recognise individual farmers who play an important role in their local communities.”

Edna has given up lots of her time to support the Young Farmers Community in Pembrokeshire, which plays a vital role in bringing through the next generation of farmers. Edna has been a Club Leader with Llysyfran Young Farmers Community for over 40 years. In her time Edna has mentored, trained, and supported countless young people and she has helped give these young farmers new skills and confidence, which will set them up for a bright future. In fact, Edna’s impact in the community has been so great and longstanding that she was recently awarded the Pembrokeshire Association of Voluntary Services (PAVS) Long Service Volunteering award to recognise her contributions.

MP Crabb said, “It is a real honour to present this award to Edna and to formally acknowledge all her hard work and dedication. It is vitally important that we recognise the work of community champions, like Edna, whose work often goes unseen to the wider public and whose efforts ensure future generations are set up for success.”

NFU Cymru President Aled Jones said: “We’re delighted that Stephen Crabb MP has chosen to champion the contribution of agriculture in his constituency by nominating a local winner of the Community Farming Hero Award. In selecting Edna as his Community Farming Hero, Stephen Crabb MP has chosen to recognise someone who is a real pillar of her local rural community.”

Stephen has invited Edna and a guest to join him for a tour and tea on the terrace at the Houses of Parliament.