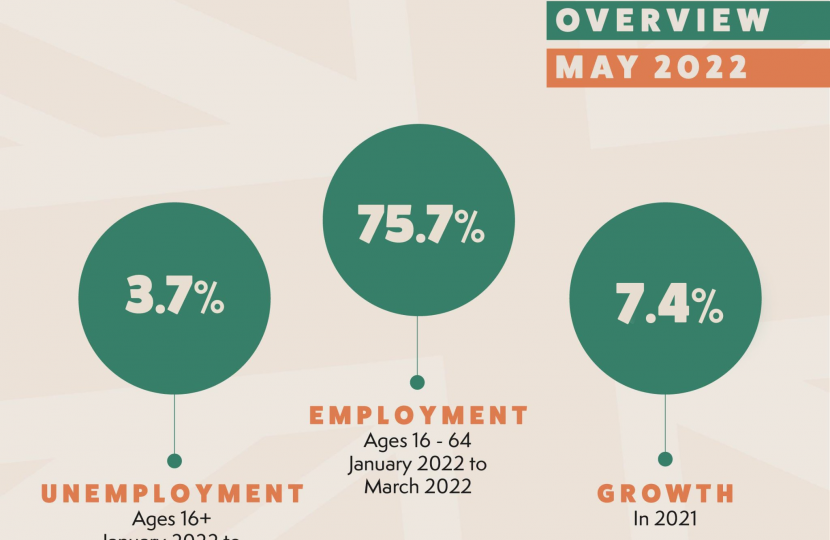 Figures published yesterday by the Office for National Statistics show that unemployment is falling across the country while the number of unfilled job vacancies continues to increase.

The UK unemployment rate for January to March 2022 decreased by 0.3% on the quarter to 3.7%. The number of job vacancies has also increased nationally with 1.295 million job vacancies on average across February to April 2022, up from 1.261 million in the previous quarter. For the first time ever, there are fewer unemployed people than job vacancies.

In Preseli Pembrokeshire, the number of people claiming unemployment related benefits aged 16-64 has decreased by 37% from 2,316 to 1,445 in a year, as more people take advantage of the growing number of job opportunities locally. Those claiming unemployment related benefits in Preseli Pembrokeshire remains lower than that of the national average at 3.2% compared with 4%.

But figures published today show that prices are rising at their fastest rate for 40 years with inflation at 9%. The rate is expected to sustain and is on course to continue to increase over the course of the year. Mr Crabb has consistently spoken out to protect those on the lowest incomes, calling on the Government to offer further support to help ease the soaring cost of living.

“We know that the pandemic has put a strain on the labour market, and I have been told by local businesses that staffing and recruitment has been a cause for concern. But these employment figures are extremely positive for Pembrokeshire, and show that the labour market is strong”

“The local job centre does a tremendous job at helping to fill vacancies through providing a tailored recruitment service for local employers. It is great to hear and see that people are making use of these services and seeking work”

“With the summer tourist season looming, no doubt local tourism and hospitality businesses in Pembrokeshire will continue to see an increase in the uptake of work”

“However, these positive figures sit in the backdrop of the cost of living crisis. Having recently met with Citizens Advice locally, and received many emails from worried constituents, I am acutely aware of the financial pressures that so many are facing and the need for some easing of the burden”

“I have been consistent in my calls for the Government to offer further support to those on low and middle incomes. With the latest inflation figures released today, this problem is only set to get worse and it is clear that without targeted action many will fall into real hardship and debt”