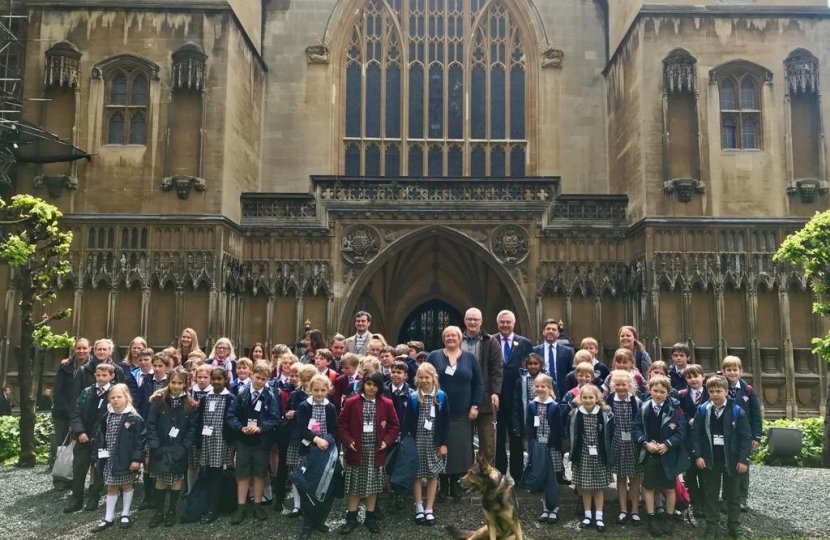 Preseli MP Stephen Crabb has welcomed pupils from Redhill School, Haverfordwest to Parliament, after their year-long campaign to change a law.

On Wednesday (May 8), the Redhill pupils met with Stephen Crabb in Westminster having spent the last 12 months campaigning for Finn’s Law. This campaign focused on the story of Police Dog Finn, who was attacked while on duty with his handler PC Dave Wardell. Finn’s Law looked to change the law so that service animals, attacked in the line of duty, would be protected by law.

The pupils were also introduced to Police Dog Finn, the focus of their campaign, and PC Wardell who thanked the pupils for their continued support.

Last month, the new legislation was approved meaning causing unnecessary suffering to a service dog or horse is now a criminal offence in England and Wales. Previously, attacking or wounding a service animal was classed as criminal damage but these changes will bring better protection to these animals and will also address the concerns over defendants claiming self-defence following their attack on service animals.

Following the meeting, Stephen Crabb MP commented: “The pupils have worked incredibly hard fighting for Finn’s Law; writing letters to the Minister, asking me to support the campaign and working with other schools across the UK.

“Therefore it was hugely enjoyable and inspiring to be able to welcome the pupils to Westminster and to introduce them to Finn and PC Wardell, especially has their hard work has led to a change in the law. For too long the law was too weak and the thugs who attack police dogs have got away with a slap on the wrist.”

Deputy headteacher Vicky Brown, who led the pupils to Parliament, said:  “It was fantastic to watch the children meeting Fabulous Finn! PC Wardell and Sir Oliver Heald congratulated them on their help with the campaign and the children were thrilled. Thank you to everyone who made this meeting possible!”