Crabb urges us to ‘not drop the ball’ on polio vaccinations 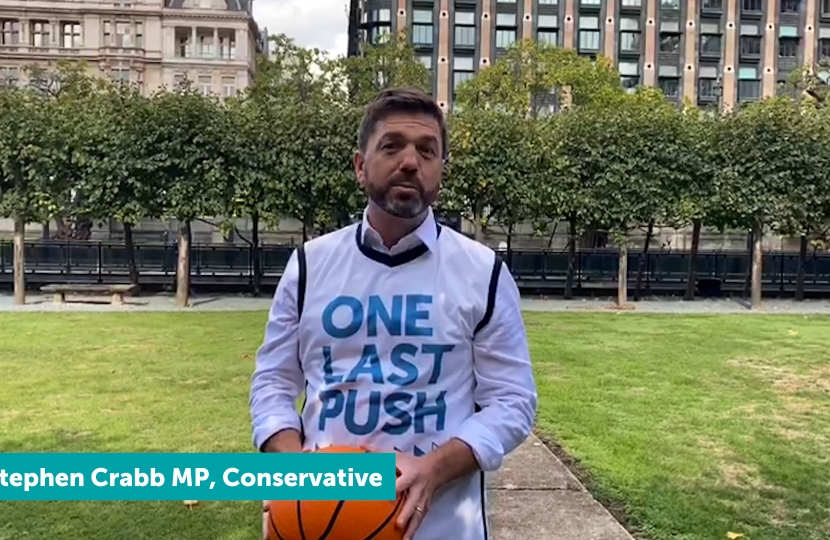 The group, all champions of the One Last Push campaign, have produced a video released on October 24th (World Polio Day), reminding people that ‘we can’t drop the ball’ on the fight for eradication. The film is inspired by Ade's role as a professional basketball player.

This August, Africa was certified wild poliovirus free. This landmark achievement was made possible by global collaboration and the unwavering dedication of thousands of people on the ground working tirelessly to ensure every last child receives the vaccine. The UK has played a leading role in this remarkable progress – last November, the UK Government pledged to vaccinate 400 million children a year until 2023 against polio.

Mr Crabb is an advocate for polio eradication and a champion of the One Last Push campaign. He says:

“Despite remarkable progress, polio is still a reality for children in Pakistan and Afghanistan. The UK must continue playing a leading role, and continue to support partners, organisations, and the people on the ground working towards eradication. Organisations like Rotary International have also played an important part in combating polio, with their Purple4Polio campaign, which has been well supported in Pembrokeshire.

“With the success in Africa, we now need ‘One Last Push’ to help free other countries of this terrible disease.”

Despite the good news, challenges to polio eradication efforts such as mobile populations, weak routine immunisations, community refusals, have been exacerbated this year by the COVID-19 pandemic.

Now is the time to bring together voices of support for World Polio Day to ensure we don’t lose the gains we’ve worked so hard to achieve and continue to keep our foot on the pedal until polio is wiped out for good.