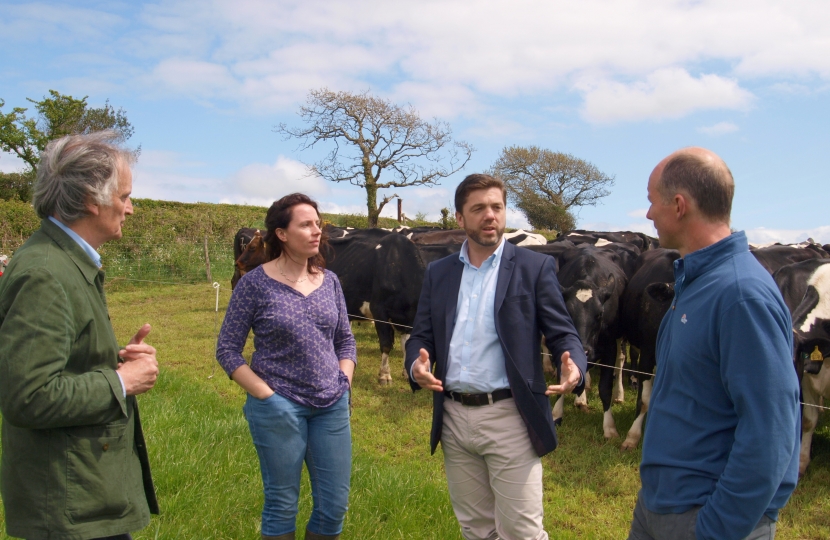 Preseli MP Stephen Crabb has called for an emergency support package for dairy farmers being forced to dump milk due to the coronavirus crisis.

Following the collapse in sales at coffee shops and restaurants, farmers in the  supply chain for outlets like Costa Coffee and Starbucks are being left unable to move milk off their farms while being asked to shoulder steep price cuts. Stephen Crabb has called for the UK and Welsh Governments to step in and provide support to dairy farmers caught up in the crisis. So far, none of the business support packages announced covers farmers.

Although demand for milk at supermarkets has increased by 20%, demand in the foodservices sector has fallen by more than 70%. Some dairy farmers have been left with no market for their product, a reduction in their payment and having to dispose of the milk. This added pressure comes at a time when the Welsh Government has announced it is pressing ahead with controversial plans to create an All-Wales ‘Nitrate Vulnerable Zone’ which farmers say needs to be re-worked.

Stephen Crabb, who last week wrote to DEFRA Minister George Eustice asking the Government to support the dairy sector, has also discussed the issue with local dairy farmers and the National Farmers Union.

Commenting on the situation, Stephen Crabb said: “Farmers are the backbone of our economy in Pembrokeshire, and they have an important role to play during this crisis as they continue to feed the nation. However, the dairy industry is fragile at the best of times. The impact of the coronavirus crisis has left many dairy farmers in a seriously difficult position.

“To see images of farmers pouring away their milk, their hard work literally going down the drain, is shocking. Whilst the UK Government has come out and supported numerous industries, it’s vital that that support extends to farmers facing potential ruin. In Wales farming support is devolved to Welsh Government so we need to see UK and Welsh ministers working together on this.”