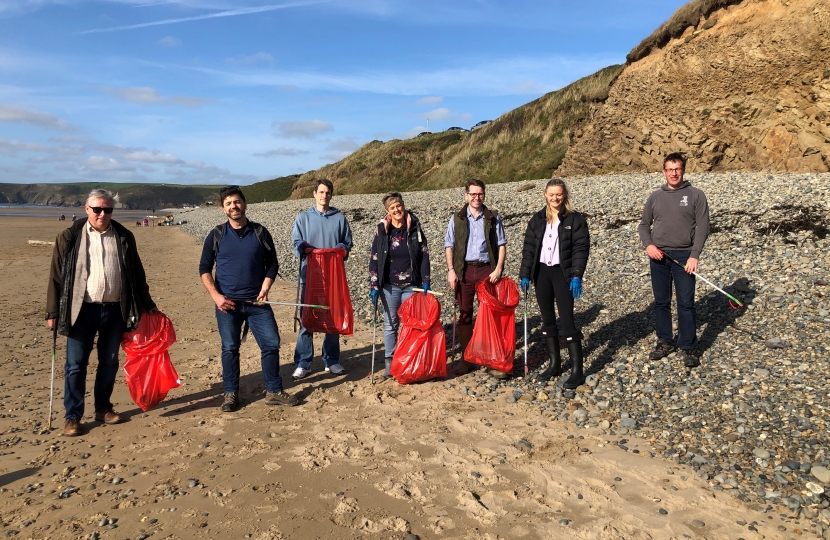 Pembrokeshire is one of the smallest of the UK’s National Parks and is a beautiful place to live and work. The stunning natural environment is a huge draw for tourists over the busy summer months. Looking after our environment is important to the people who live here.

Stephen believes that we must build upon the achievements of COP26 and continue to lead by example, driving positive action to address climate change and decarbonise our economy.

As a result of agreements reached at COP26, 90 per cent of the world is now covered by net zero targets. Clearly, there is more work to do and Stephen is encouraged that the Glasgow Climate Pact requires countries to return next year with a more ambitious 2030 emissions reductions target in line with the 1.5C target, ensuring crucial momentum on climate action this decade is maintained.

The Government’s Net Zero Strategy builds on the Ten Point Plan and sets out a clear path for the changes needed to secure our energy, create jobs and new industries, and end the UK's contribution to climate change. Through this the UK can rapidly cut carbon emissions, while creating new jobs, new technologies and future-proof industries that will generate economic growth for decades to come.

The Government’s £12 billion Ten Point Plan lays the blueprint for a green industrial revolution, while supporting and creating 250,000 green jobs. Stephen is campaigning for Pembrokeshire to be in the best possible position to benefit from the Net Zero Strategy by focussing on the growth and the development of the renewable energy sector here in Pembrokeshire which has real potential in tidal, hydrogen and offshore wind developments to create new green jobs and boost the local economy.

Pembrokeshire has 11 blue flag beaches and has very good water quality which is why maintaining water quality is a key issue for Stephen. He was an early backer of the campaign to get water companies to move faster on how they deal with storm overflow discharges and he is continuing to speak to local and national groups on this important issue, because he believes that more progress needs to be made. Stephen supported the Environment Bill which will improve our water quality, help create and promote biodiversity, reduce the use of storm overflows, reduce harm caused by overflows, and reduce single use plastics.

Stephen backs the work already done by Government to reduce the amount of plastic being used. He believes the introduction of a Plastic Bag Tax, banning plastic straws, plastic cotton buds and plastic stirrers, has made a big difference. He hopes these items will be harder to find on his many local beach litter picks as a result.