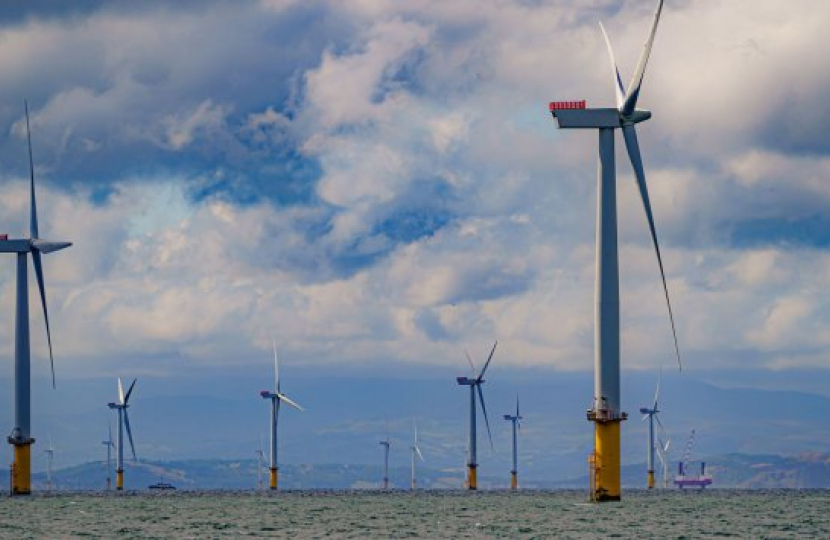 With rising energy costs and fuel-supply shortages, this winter is not going to be easy.

The war in Ukraine has also brought into sharper focus the nation's vulnerability to geopolitical forces.

The UK cannot afford to be timid or lacking in strategic thinking in our decisions.

The decarbonisation of our energy system, and building towards more robust national energy security, must be a priority, regardless of which end of the political spectrum you sit on.

Few issues are so large in their scale and potentially far-reaching in their impact.

Politicians will need to work together for a truly transformational outcome.

The decarbonisation of the country’s energy system and wider economy is rooted in the continued and rapid deployment of renewable power generation, alongside switching to sustainable fuels and a growing hydrogen economy.

All options require masses of fresh power generation and green energy ports as their launch-pad, alongside regulatory, policy and – most importantly – sustained political backing.

Wales now has a unique opportunity to support the UK and Welsh Government’s 2050 net zero target and establish a new green industry in floating offshore wind, or FLOW, in the Celtic Sea.

And it is an opportunity that goes beyond decarbonisation.

Whether you are looking to become a welder, electrician, data specialist or marine surveyor, floating offshore wind will create thousands of high-quality, long-term jobs for future generations.

It will also provide the opportunity for Wales to capture as much of the £54 billion available for the supply chain, including manufacturing, maintenance and operations.

These new green jobs will equip the next generation with skills for the future.

The case for FLOW is compelling – and it will happen – but the economic benefits will only be felt by the people of Wales, and the rest of the UK, if there is strong and sustained political backing from both the UK and Welsh Governments.

We need both governments to back the bid for the Celtic Freeport as the first step in accelerating the delivery of FLOW at the scale needed.

The scale of the opportunity

The Celtic Freeport offers one of the biggest opportunities of its type for Wales.

Floating offshore wind in the Celtic Sea will be able to generate 24GW by 2045.

That is one-quarter of the UK’s target.

To generate this, we will need to build and deploy over 60 turbines a year.

These structures will be around 300 metres tall – the size of the Shard in London and dwarfing Wales’ tallest building, the Meridian Tower in Swansea.

In order to deliver this ambition at the scale and speed will require support and investment across political and geographical divides.

Collaborating for the future

The Celtic Freeport is a multi-port solution, and one that builds on the strengths of two of the UK’s leading ports – Milford Haven and Port Talbot – to create a green investment and innovation corridor in what is currently the second biggest carbon emitter in the UK.

Together, these are the only deep-water ports at the right proximity to the Celtic Sea and with the critical quay capacity and development space for the scale of the project at hand.

This combines with the supporting infrastructure, heavy engineering and industrial cluster along the M4 corridor that will be necessary to deliver floating offshore wind.

The prize is clear: the creation of a new long-term industry where the high-value manufacturing has "Made in Wales" firmly embossed on the tin.

It will provide significant opportunities for upskilling and reskilling, as well as creating momentum towards the decarbonisation of south-west Wales and the rest of the UK.

Associated British Ports and the Port of Milford Haven have committed to invest £710 million in their green focused energy ports, while the first phase of construction at Pembroke Dock is already underway.

This port infrastructure will act as a launchpad to help leverage a further £700 million of investment in factories to build out these massive renewables structures.

However, the threat is also apparent.

Failure to act early – both by the public and private sectors – will deliver a similar outcome to one we see from the offshore wind developments in the North Sea.

A disproportionate amount of the supply chain value captured by Denmark and others because of their foresight to move early and decisively to secure first mover advantage.

The decision – the selection of the Celtic Freeport – is the next vital step to secure this industry for Wales – and will provide another global market signal to lever this significant investment.

With the stroke of ministers’ pens, Wales can unlock £5.5 billion of new investment and 16,000 jobs.

We hope the UK and Welsh Governments seize their opportunity this winter.