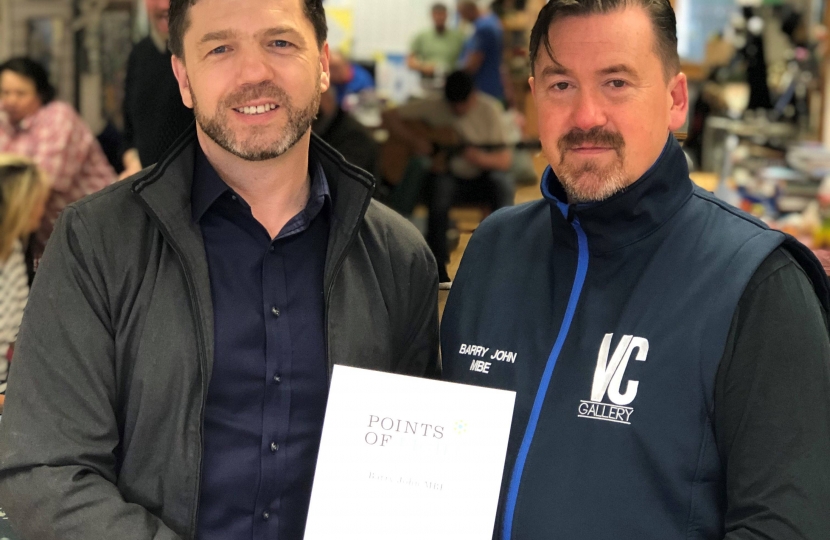 The founder of the VC Gallery has been recognised for his work by the Prime Minister.

Barry John MBE received his Points of Light award from Preseli MP Stephen Crabb, who congratulated him on receiving the prestigious award.

Having spent 24 years serving in the British Armed Forces with the Royal Welsh Infantry, Barry has used his passion for art as a response to conflict and experiences of PTSD, and realised a need in his community for other veterans to do the same. In 2014, Barry set up the ‘VC Gallery’ to provide both a studio space and a welfare hub running regular workshops focusing on building self-confidence, new skills and social development, as well as offering a signposting and referral service. Over 1,500 people have since accessed the studio and its services, with a new hub established in Pembroke Dock in August 2018.

Barry said: “Receiving this award and a personal message from our Prime Minister was an amazing boost for the important work we do in West Wales. Our team of trustees, volunteers and members are extremely happy to have been recognised at the highest level for the Points of Light Award and we thank every third sector charity and organisations that we collaborate with to make a difference in Pembrokeshire.”

After presenting the award to Barry, Stephen Crabb MP commented “It was a pleasure to present Barry with his Points of Light award from the Prime Minister, in recognition of his excellent work with veterans and the wider community in Pembrokeshire. Theresa May has been a consistent champion for improving mental health during her time as Prime Minister, so it is rather fitting that one of her final Point of Light awards is to Barry. My warmest congratulations to him.”

In a personal letter to Barry, Prime Minister Theresa May said:

“Through the ‘VC Gallery’ you have created a wonderful initiative to provide vital welfare support to those who have, like you, sacrificed so much in the service of our country. Your passion for art is inspiring others to improve their skills and wellbeing, as well as offering an inclusive space for people who are feeling isolated. I wish you the very best in your continued work.”