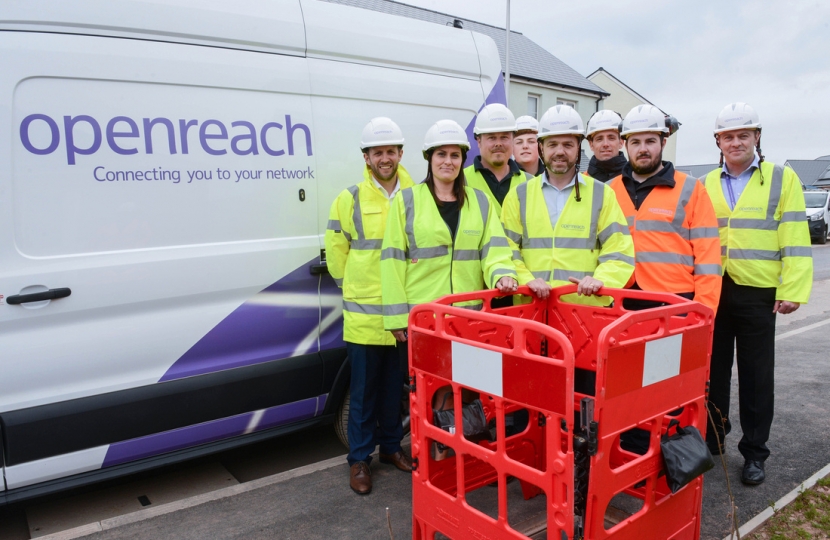 Stephen Crabb MP for Preseli Pembrokeshire has been meeting with Openreach engineers working on the next generation of broadband technology to connect a new social housing development in Milford Haven.

He saw a new ‘full-fibre’ network which has been built directly into the development for Pembrokeshire Housing Association on Thornton Road to deliver more reliable, ultrafast internet connections. The future-proof services can carry speeds up to 1Gbps1 - 21 times faster than the UK’s current average.

Mr Crabb also got an update on broadband services available across his constituency in addition to Openreach’s recent push to recruit more trainee engineers. According to the independent website Think Broadband, nearly 90 per cent of premises across Preseli Pembrokeshire are now able to connect to broadband at a speed of 30Mbps and above – enough to stream six HD movies simultaneously[1].

Mr Crabb said: “Good connectivity is vital in this day and age, so spending time with engineers to hear more about what Openreach is doing across Preseli Pembrokeshire to improve our connectivity was useful.”

“It was interesting to hear about plans for full fibre broadband, where the fibre runs directly to people’s homes. While this is in the early stages, it’s great to know that the build is happening ahead of demand and that some constituents can already enjoy reliable broadband capabilities which are among the best anywhere in the UK. There is more work to do, and it’s important progress continues at pace.”

“I was particularly interested to see how Openreach are working with new housing developers, such as Morganstone who are building a new site in Milford Haven on behalf of Pembrokeshire Housing Association, to ensure that new homes being built have the connectivity that people would expect. I would urge other developers to follow suit and work with Openreach as soon as possible in the building process so that our new homes will be able to meet our future digital needs.”

Openreach installs full fibre networks free of charge to all new housing developments of 30 or more homes and has cut prices by more than three quarters for smaller sites, where it will co-fund work.

As well as its commercial investment in upgrades, Openreach has been working closely with the Welsh and UK Governments to bring fibre-based broadband to communities which were not included in any upgrade plans by private companies.

The Superfast Cymru partnership rollout which was completed at end of last year has brought fibre-to-the-cabinet (FTTC) broadband to many local communities and includes fibre-to-the-premises (FTTP) in areas where it is the best technical solution bringing access to ultrafast broadband speeds and reliability.

Openreach are once again working with the Welsh Government to look at ways of connecting those homes and properties that missed out during Superfast Cymru.

The visit was hosted by Connie Dixon, Openreach’s partnership director for Wales, who said: “We know good, reliable broadband is really important to local people, and we’re making progress every day, but we also appreciate that there’s more work to be done.

“We’re glad Stephen Crabb was able to make time to come and learn about the challenges, technicalities and benefits of delivering digital technology in his constituency and see an example of the next generation of broadband already live at Milford Haven.

“We want full fibre to be installed in all new developments in Wales, and all residents having access to a competitive retail market through our open network. To make this happen we’re working hard to build closer relationships with developers large and small, and to show how we can help them create future-proof networks in their new developments - and why it matters.

Openreach are currently recruiting 6 additional trainee engineers across Pembrokeshire – on top of the 20 engineers that have already been recruited over the last 12 months – to help deliver Wales’ fibre future.

Openreach’s Fibre-to-the-Cabinet footprint, at speeds of up to 80Mbps, currently passes more than 1.3 million homes and business premises in Wales, where take-up of superfast services across all networks stands at around 53%.

The company recently announced that it’s ramping up its ‘Fibre First’ roll-out to bring ultrafast services to four million UK premises by 2021, and, with the right conditions, to go significantly beyond.

Developers that want to make sure that people can enjoy the benefits of full fibre when they move into their new homes can register their new sites on the Openreach website.