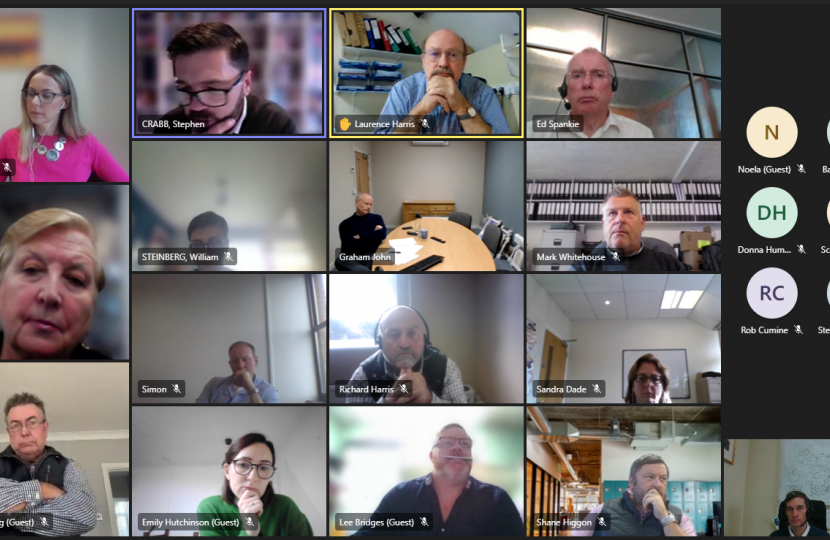 Preseli Pembrokeshire MP, Stephen Crabb, gathered together a cross section of Pembrokeshire businesses for an in-depth roundtable focusing on the impact of rising energy costs on Friday 7th October.

With current pressures around the increase in supply and cost of energy, the MP was interested to hear direct from important Pembrokeshire employers in a dedicated online forum.

Stephen Crabb was able to discuss the Government package of support to business – branded as the Energy Relief Support Scheme - which was introduced from 1st October to help businesses through this extraordinary period where gas and electricity prices have been significantly inflated in light of global energy prices.

Through the scheme, discounts will be applied to energy usage initially between 1 October 2022 and 31 March 2023 and available to everyone on a non-domestic contract including businesses, voluntary sector organisations, such as charities, public sector organisations such as schools, hospitals and care homes. This support is equivalent to the Energy Price Guarantee put in place for households.

Stephen Crabb MP said “I am aware that, for many businesses across Pembrokeshire, rising energy costs are the number one issue. During the summer I met with a number of local companies who explained to me the difficulties they were experiencing in securing any affordable electricity contracts. The roundtable idea developed from these conversations and was a really useful way for me to connect with businesses to hear more about their own experiences and provide important feedback to ministers.”

The Government plans to publish a review into the operation of the scheme in 3 months’ time, to inform decisions on future support after March 2023. The review will focus in particular on identifying the most vulnerable non-domestic customers and how the government will continue assisting them with energy costs. These are likely to be those who are least able to adjust, for example by reducing energy usage or increasing energy efficiency.

“It’s important for me as the local voice for Preseli Pembrokeshire in Parliament to be speaking up for local businesses and ensuring that their views are represented ahead of the review, ” commented Stephen.

He added, “I have been repeatedly calling for more support for those not connected to either the gas or electricity grid who are reliant on expensive heating oil and LPG. The £100 support payment just isn’t enough to make the difference to households let alone businesses in that position.  I am disappointed there is still no clarity on what the assistance looks like for those businesses operating across Pembrokeshire in this situation. I met with the Energy Minister last week to push for additional help for the 50 percent of households and more, who live without a mains energy supply.”

Other items discussed during the roundtable was investment in renewable energy projects to offset the rising costs of energy. Stephen heard that many businesses have been unable to proceed with projects because of capacity limitations on The National Grid.  As Chair of the Welsh Affairs Committee, Stephen has recently completed an inquiry into the current issues affecting grid capacity and has been actively calling on Government for greater investment to boost much-needed capacity which would give the green light to many projects across the constituency that are currently paused.

A positive discussion was also had on employment with many businesses having open employment vacancies. The roundtable reflected the latest ONS unemployment figures released this week, showing that across the UK as a whole, the unemployment rate was 3.5%, the lowest it has been in 50 years. The number of vacancies in Pembrokeshire is still high showing that more can be done to help fill the vacancies and encourage more people into work.