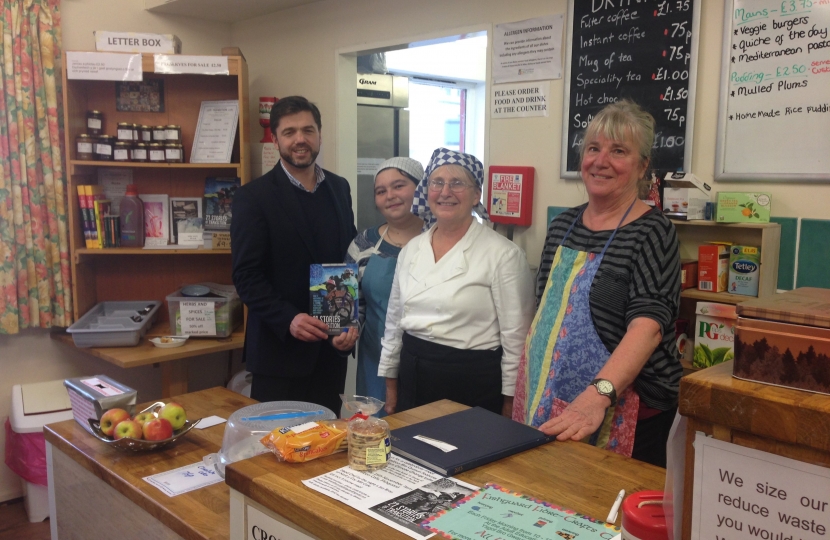 Secretary of State for Wales and Preseli Pembrokeshire MP Stephen Crabb, visited Fishguard’s Transition Café on Friday 13th November to congratulate Transition Bro Gwaun members on the success of their project which has fought off tough competition to feature in a new book which will be showcased at the United Nations Climate Change Conference (COP21) in Paris. Prime Minister Manuel Valls has confirmed on French Radio Station RTL that the international climate conference (30th November – 11th December) will go ahead as planned despite last Friday’s attacks.

The book ’21 Stories of Transition: how a movement of communities is coming together to reimagine and rebuild our world’ will be showcased at the conference which brings together 120 political leaders to commit to tackling climate change.

Fishguard's Transition group  has been running since 2008, and  is the only Welsh group to have two of its projects featured in this inspiring book which highlights 39 projects from local communities in 15 countries around the world that have had a positive impact not only on their communities but on reducing carbon and waste.

During his visit to the café, which was also used to host his advice surgery, Stephen Crabb MP said,

“I continue to be incredibly impressed by the surplus food café and I congratulate Transition Bro Gwaun on the project’s inclusion in the ’21 Stories of Transition’. I am delighted that our local transition movement has been recognised in this way and is the only organisation in Wales to be highlighted in this book and showcased at the climate conference.”

“They have created a successful operation which is not only serving a community need but is helping to reduce waste and cut carbon. All the staff and volunteers do an excellent job in creating affordable and healthy meals for sale from good food that local businesses and people would otherwise throw away.”

Chris Samra, one of the founder members of Transition Bro Gwaun, commented

“Our surplus food project is more than just a way of reducing food waste.  It’s an experiment – an attempt to put carbon reduction, sustainability and community resilience at the heart of a social enterprise and to make it a viable business suitable for a low growth, sustainable society”.

“The café provides work experience opportunities for local people, with a particular focus on youth, the disabled and long term unemployed people. Not only does it act as a centre for community cohesion and a meeting place for many local people and groups, it also prevents an average of 600 kilos of food going to landfill each month and makes a carbon savings of 21 tonnes per year.”

“The book is a collection of inspiring stories focused at a grassroots level which shows how communities can make a real difference to the environment whilst having a positive impact on their immediate communities.”

The Abergwaun Community Turbine is also featured in the section of the book 'The Rise of Community Energy'.  The turbine is a 50:50 joint venture with a local farmer, and the Transition group's share of the profits from the generation of electricity will be used to help the local area by funding low carbon community projects.