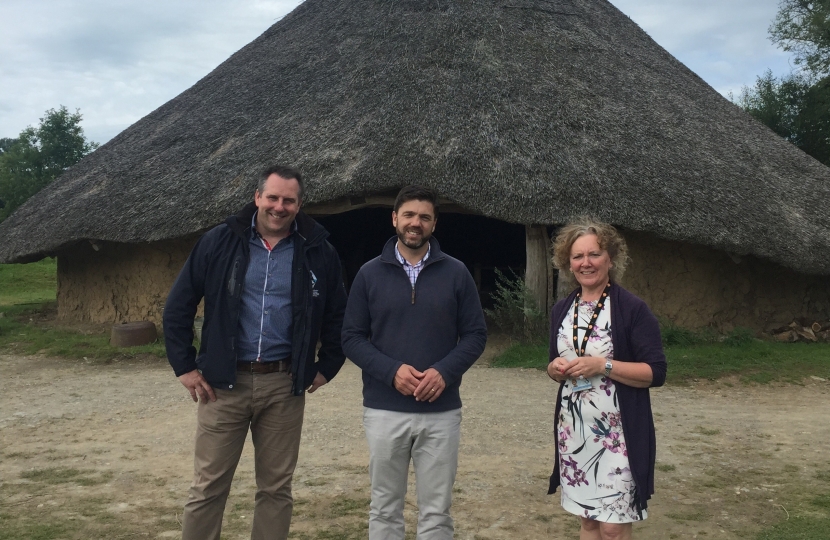 The Iron Age Village, near Eglwyswrw is the only one in the UK built on an original settlement from 2,000 years ago and has over 40,000 visitors a year. It was also recently award a TripAdvisor score of 4.5 out of 5.

Stephen Crabb MP said: “Pembrokeshire is full of history, and heritage attractions such as Castell Henllys are vital not only to the local economy, but also to the education of local pupils. Castell Henllys remains a firm favourite among schools across our county.

“The needs of tourists are ever changing and it was good to discuss this with James and Jenn, along with the National Park Authority’s role in promoting North Pembrokeshire’s historical and cultural significance to tourists.

“It was also good to see the Park Authority’s investment in Castell Henllys, ensuring that it remains a stand out attraction for years to come.”

James Parkin said: “Castell Henllys is a unique heritage attraction, set deep in the world-class National Park landscape. The Authority has invested heavily in improving the site in recent years and we were extremely pleased to have the opportunity to welcome Stephen Crabb MP to Castell Henllys to view these developments.

“The Park Authority has an important role in promoting the language, culture and heritage of North Pembrokeshire and Castell Henllys makes a valuable contribution in supporting this. Recent investments to the site have brought significant economic benefits to Pembrokeshire and strengthened the site’s reputation as one of the county’s leading tourist attractions.

“The National Park as a whole is the foundation of Pembrokeshire’s tourism industry, attracting almost 5 million visitors annually and contributing £187million Gross Value Added to the Welsh economy. The Authority is committed to investing in its visitor attractions and continuing to make a strong contribution to the county’s tourism economy.”