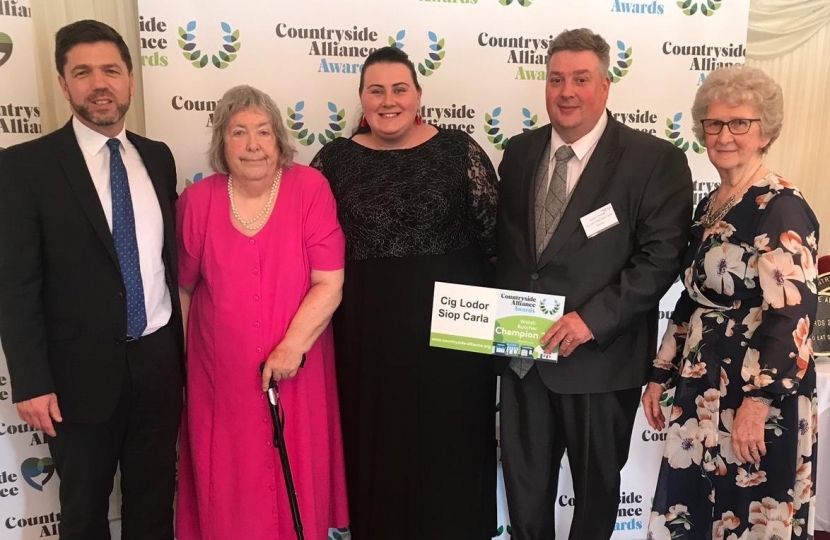 Cig Lodor Meats (Carla’s Shop) from Lodor Fach, Maeclochog flew the flag for Welsh butchers yesterday (June 19th 2019) at the Champions reception of the Countryside Alliance Awards held in the House of Lords. Cig Lodor Meats had already won the Welsh title and were in contention for taking the British title.

Supported by their MP, Stephen Crabb, who commented: “It was great to see Carla and the Thomas family in Parliament for the Countryside Alliance awards. Cig Lodor & Siop Carla were crowned the best Welsh butchers a few months back so it was great to welcome them to Parliament where the best of the best of rural businesses were in attendance.

“Cig Lodor’s superb farm reared meat comes from a wonderful, traditional Welsh farming family and my warmest congratulations to them for being nominated in such a competitive category.”

Carla Thomas of Cig Lodor Meats is a butcher who provides her customers with a seven day a week service. Starting out at the age of just 14, Carla Thomas fell in love with farming which instilled in her a passion to produce food from the gate to the plate. All the beef and lamb is reared on the farm, produced on grass, and returned to the shop for butchering. The pride in producing their own farm reared meat oozes from behind the counter.

The 2019 Countryside Alliance Awards, also known as the Rural Oscars, were handed out to the top rural enterprises in the country by Defra minister Lord Gardiner of Kimble, The cream of rural businesses from across England and Wales, who had already won their regional title, descended on Westminster to find out if they were to be crowned national champion.

Rural Affairs Minister Lord Gardiner said: “I delighted that so many hard-working rural enterprises - from food and drink businesses to village post offices and butcher shops - have been honoured with these renowned awards.

“Rural communities generate almost £250 billion for our economy, and is critical that we acknowledge those organisations that make vital contributions to vibrant communities, prosperity and wellbeing.”

The Awards are the Countryside Alliance’s annual celebration of rural produce, skills, enterprise and heritage through small hard-working businesses. They are now in their 14th year and have become the definitive rural business award to win. This year Countryside Alliance received more than 18,000 nominations, meaning these finalists truly are the best of the best.